A History of Housing in New York City: Revised Edition 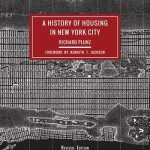 In November 2016 Richard Plunz published the revised edition of his book, A History of Housing in New York City (A History of Housing in New York City, Columbia University Press, revised edition, 2016). The book traces New York’s housing development history from 1850 to the present through text and over 300 illustrations. Plunz examines the housing of all classes, the effect of urban economy on development, and the tensions between builders, government planners, housing reformers, and architects throughout housing development. His analysis is placed within the context of the broader political and cultural development of New York. The revision extended the scope of the book into the city’s recent history, adding three decades to the study and covering the recent housing bubble crisis, and the rebound and gentrification of the five boroughs.

The book got consistently positive reviews and his sold out event at the Museum of the City of New York (http://architecturediary.org/newyork/events/6982) got the attention of the Brian Lehrer Show, where he was invited on November 17th.