On May 18, Maria-Paola Sutto was an invited participant at the CXI 2018 conference, where she was included in the  project of the artist Juan Miguel Marin. The CXI conference is the leading business conference on innovation in the consumer experience. The art project was a collaboration to remind to all of us that no… read more

On October 2, 2017, UDL Director Richard Plunz was ‘on the air’ with Brian Lehrer and David Favaloro of the Lower East Side Tenement Museum to kick off the Brian Lehrer Show’s new series, ‘A People’s Guide to Power: Real Estate Edition’. In the segment, Plunz, Favaloro, and Lehrer discuss the time in the early… read more

The Urban Design Lab research on cognitive mapping and urban social media was on display in a poster session at the annual Columbia Data Science Day on April 5th, 2017. The work correlates new mapping techniques for health and well-being with normative GIS-based data. This research is made in collaboration with the Columbia Institute for… read more

Richard Plunz spoke: on December 13th at the Royal Flemish Academy of Belgium for Science and the Arts, on “The Urban Project,” together with the celebration of the work of Marcel Smets, former Flemish State Architect and Professor Emeritus of Urban Design at the Katholike Universiteit Leuven; and at the University of Ghent about new… read more

2016 was an important year for the Urban Design Lab. Plunz spoke publicly at many events on new research directions in “Next Generation Public Space/Social Media Interfaces,” highlighting Urban Design Lab work on green infrastructure innovation in New York City, such as the 13th Annual Architecture Week of the Colegio Oficial de Arquitectos in Madrid in October…. read more 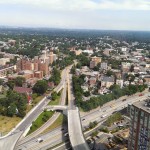 Alternative Futures for New Rochelle: The Next Generation Live/Work City

This report projects future development scenarios for New Rochelle, New York, within the context of the New York City and Long Island Sound regions. Exploring a diversity of possibilities, the report’s overriding concern engages ecological considerations related to New Rochelle’s unique position as a transportation hub on the edge of the most urbanized estuary in… read more