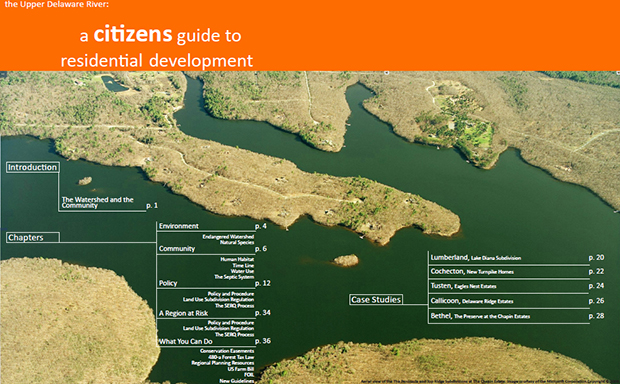 The Urban Design Lab, along with the Upper Delaware Preservation Coalition (UDPC) and the Open Space Institute (OSI), prepared A Citizen’s Guide to Residential Development, with Urban Design students at the Graduate School of Architecture, Planning and Preservation (GSAPP) at Columbia University. The intent of the published report is to inform existing and new residents in western Sullivan County and the greater Upper Delaware River valley of environmental threats in general, with particular reference to land subdivision development, formal and informal public review processes, and the evaluation of actual case studies. The final publication was presented at the annual Green Earth Fair.

The Upper Delaware is a natural watershed basin, and the future of its natural and social ecologies depends on recognition of this fundamental geographic condition. Until recently, it has been a region dominated by river-related transportation, agriculture, and enterprise. Until recently, even as the East Coast metropolitan areas grow larger, the Upper Delaware has kept a coherent physical and social identity. It is precisely this idyll that is both the attraction and the demise of the region, as it is being rediscovered through urban expansion. Residential development has grown together with associated environmental impacts.

All residents of the Upper Delaware basin are integral to a fragile watershed. Surface and underground water flows are quickly complicated by new demands on this resource. The intricate webs of native natural ecologies along the Upper Delaware River are vital for maintaining the flora and fauna that make this region so appealing to developers. Developers, however, are often the source of land disturbance and water pollution. Unless residents, planners, and developers are made aware of the relationship between certain kinds of development and ecological stress, the zest for environmental beauty could be the very thing that destroys it.

The recent Upper Delaware development boom has demonstrated the strategic importance of the region as a new primary focus of suburban residential growth. And it also demonstrates that “growth” takes many forms – not just houses and subdivisions – as urbanization is also about infrastructure, particularly related to energy and water, and these two essential lifelines of New York City have had increasingly dramatic impacts on the Upper Delaware.

The Upper Delaware is particularly vulnerable given its strategic position relative to the New York metropolitan area. Vulnerability originates in short sighted resource extraction, not only through suburban sprawl, but also through delivery infrastructure. There is too little discussion of conservation of resources, both in the city and countryside, and too much reliance on short term solutions to long term problems.

« Hancock and the Marcellus Shale A River Endangered »