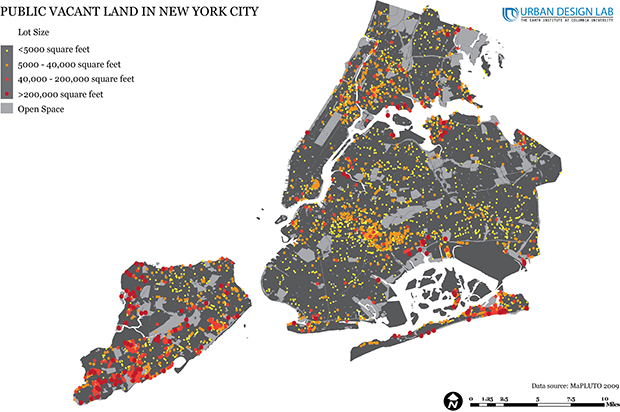 Volatility in global food and fuel costs has increased public awareness of the vulnerability of the existing food supply and of the detrimental effects of the industrialized food system on ecological sustainability. This system has also been implicated in the epidemic increases in levels of obesity and chronic disease in America due to the overconsumption of cheap, unhealthy, and calorie-dense foods. These trends have contributed to growing public interest in establishing food production in urban and suburban areas.

Developing agricultural capacity within or close to urban areas like New York City has the potential to reduce food transportation costs and environmental impacts, provide economic development opportunities, and reduce disparities in healthful food access that have led to epidemic rates of obesity and diabetes among low income populations. Despite these potential advantages, there are challenges to establishing the viability of urban production as compared to more conventional agricultural practices, including scalability, site availability, energy efficiency, and labor costs.

The purpose of the project is to determine the baseline feasibility and the steps necessary for an in depth analysis of various urban agriculture techniques. The study aims to establish the basic viability of urban food production techniques as compared to rural food production, using specific case study scenarios to determine whether urban food production can be practiced in an economical and resource efficient manner. The feasibility study will focus specifically on New York City to determine potential production sites and establish which methods of alternative agriculture production would be most appropriate, and will result in an in depth analysis of the energy, economic, environmental, educational, and health benefits of the various forms of production within the city.