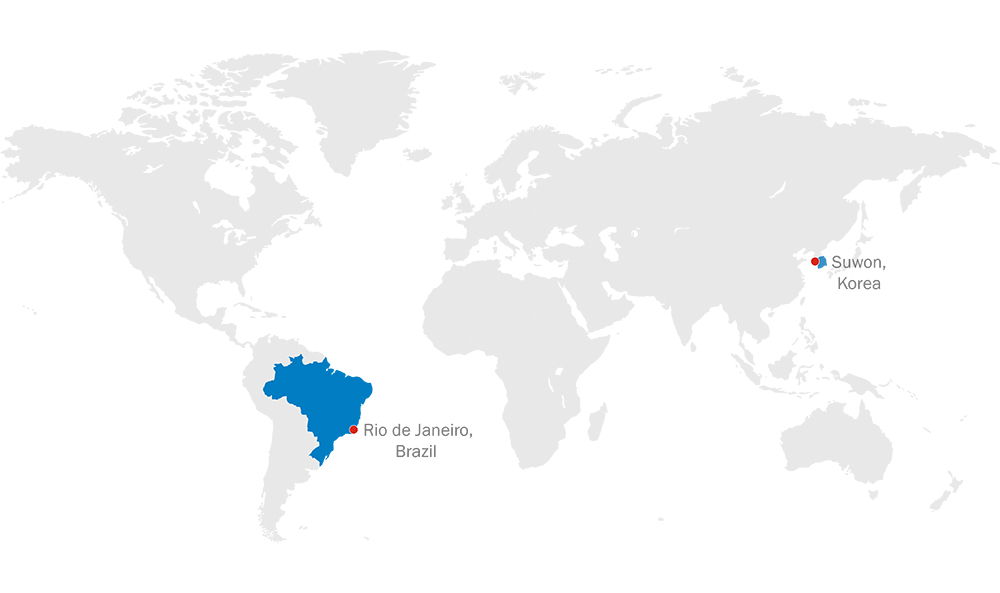 The subject of this studio is a comparative dialogue between urban regions of Seoul and Rio de Janeiro. Specifically, it is concerned with peripheral growth in each regional context. The nexus for each is a medium sized historic city center that has been drawn into recent urbanization processes and the ramifications of this sift. For Seoul, this historic center is Suwon on the city’s southern periphery; in Rio de Janeiro, it is the Santa Cruz district. Both are municipal entities covering large land areas with large agricultural pockets proposed to be urbanized, prompting concerns about disruption to historic centers, loss of agricultural uses, and lack of critical thinking about the nature of new place-making in the 21st century.

In 2003, the South Korean government introduced the Balanced Territorial Development Project to address over-centralization of urban development in the Seoul Capital Region. As a result, around 10 “innovation cities” are being built in several provinces surrounding Seoul, including the Sejong Special Autonomous City, a new multifunctional administrative center. Major government organizations and research institutes and public enterprises in the Seoul Capital region will be moved to these innovation cities with the expectation that these public facilities will foster more equitable development in each province. According to this policy, public facilities in Suwon City are also planned to move to other provinces. This studio’s work focuses on the district relocation sites within two zones; government plans for each zone are not yet detailed. Four zones have certain issues in common, such as shared locations in the western territory, and all host public agricultural research institutes. Each zone, however, also has distinct and specific issues.

Rio is developing into a global hub for Brazil’s petrochemical, pharmaceutical, and telecom industries and, owing to its outstanding natural harbors as well as highly integrated road and rail networks, it is also becoming the first hub-port of the South Atlantic and of Mercosur, the South America customs union and trading bloc. To propel this economic development, massive investments are currently being made in freight infrastructure, particularly in the district of Santa Cruz, which is located precisely in the western part of Rio’s metropolitan area where some of the larger transformations are underway. The nearby town of Itaguaí hosts major port infrastructure that is becoming an efficient and promising alternative to Guanabara Bay, where the Port of Rio is situated. Recent investments in infrastructure favor the development of the Port of Itaguaí and its region, including Santa Cruz, which enjoys a strategic and central position on the Rio-São Paulo corridor (the busiest in Brazil). The corridor is reinforced by the new Arco Metropolitano a ring-road that intercepts all major highways before they enter the more urbanized areas. Within this new context, Santa Cruz can be understood as an area of strategic interest to Rio’s administration who now must consider it, not as a poor and distant periphery, but as a land of opportunity and new economic centrality.