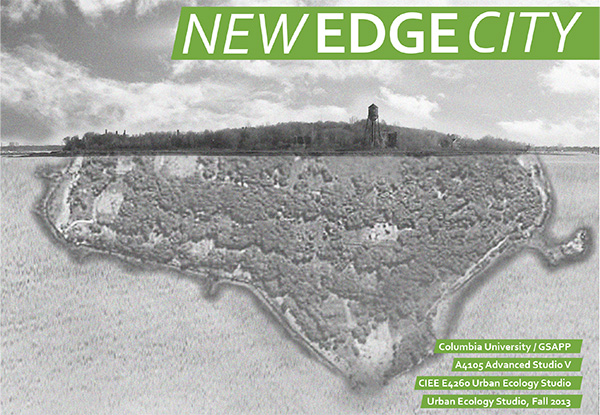 This studio engages the New York City region and the ecological considerations related to urban development in relationship to the water’s edge. For the past four decades, the normative urban expansion in the region has been landward, and planning preoccupations have typically been focused on the so-called “edge-city” phenomenon (as described by Joel Garreau): that is, the continued sprawl into the suburbs and exurbs. The “Edge City” preoccupation has now shifted from exurb to water edges, with the rising seas and climate extremes pointing the way toward acute awareness of both hazards and potential of this new urban “frontier.” The outcome is a new realization that we must now treat our urban waterfronts differently than in the past, but the question is “How?”. The studio test case for this question is the Long Island Sound and the waterfront of New Rochelle along its most urbanized edge.

Increased urbanization, climate change, coastal erosion, and sea level rise require architects, planners, and engineers to reenvision coastal cities. Fifty percent of the world’s population lives in coastal regions, most of which were initially developed due to their advantageous connection to water borne transportation systems and rich coastal ecologies. Coastal cities and their communities benefit greatly from their proximity to these ecosystems, due to connections to food, employment, transportation, recreation, and energy. Out of the 32 largest cities in the world, 22 are located on estuaries, including London, New York, Shanghai, and Buenos Aires.

The studio’s regional scope will include the Long Island Sound, an Atlantic Ocean estuary, and an extremely productive coastal ecosystem that is home to 400 species of birds, 1300 species of invertebrates and finfish, and 21,000 acres of wetlands. Like many coastal regions, the Sound is being affected by climate change and inappropriate urban development, issues that will drive the studio participants’ lines of inquiry. The Long Island Sound is unique in North America as a large quasi self-contained saltwater body. The studio introduction will analyze and develop an ecologically based critique of the Long Island Sound development options for the future.

The studio’s primary focus will then begin on the water’s edge of the City of New Rochelle, located just over the Bronx border of New York City. The water’s edge of New Rochelle, although seemingly local, connects to 600 contiguous miles of urbanized shoreline, joining New Rochelle to other urban thriving economies and ecologies. Specifically, within the New Rochelle shoreline, the studio is interested in the fate of David’s Island, which is located just off the coast and is presently unoccupied and recently devoid of building. The City of New Rochelle – one of the many coastal municipalities  located on the Long Island Sound – is looking to redefine its relationship to the water and the region in order to benefit more from its coastal resources.